When Earth Shall Be No More 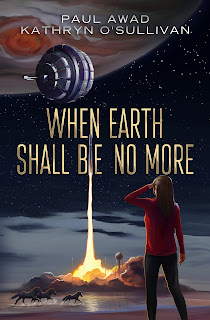 By Paul Awad and Kathryn O'Sullivan

Environmental scientist Constance Roy is one of forty-nine refugees rescued from Earth’s destruction and transported to the ark spaceship Orb by an automaton race called the Curators. Twelve months have passed since their rescue. But now, with the ship’s orbit decaying, the refugees seem doomed to crash into Jupiter’s fiery belly.

In a parallel universe on present-day Earth, another version of Constance seeks answers to the questions that have haunted her since childhood: How and why did her mother die? The head of a mysterious corporation housed at NASA’s Wallops Flight Facility can give her the answers, but not without a price.

Two timestreams collide when the Constance on Earth discovers that Nicolas, her son, has the ability to save the Orb and its inhabitants. Now she must battle treacherous Curators wishing to destroy Nicolas, while on the Orb, another Constance must fight to save the ship from Jupiter’s fatal pull. Only together can they save their son – and future generations of humankind.

“Ms. Roy?” came a voice from behind her.

She stopped. The Curators were the only creatures she knew who could travel as if barely moving the molecules of air. “Yes?” she said but did not turn around.

The voice belonged to the Curator the refugees called Fifi. Nobody could remember who had come up with the nickname, but it had made everyone laugh and stuck. Like the other Curators, Fifi’s features were angular, thin, and asexual. It was only because of her smaller stature, slightly puckered lips, and short, softly curling hair that she had been given a female gender. She was the opposite of everything Constance thought a Fifi might be.

“You are not scheduled to be on this ring today,” Fifi said.

“No,” Constance said, turning around. “I needed to stretch my legs.”

Fifi cocked her head like a befuddled Golden Retriever and scanned Constance’s legs. Constance knew how literal the Curators could be, particularly Fifi, and she imagined what must have been running through Fifi’s mind as she tried to contemplate the stretching of legs. For all their sophistication, the Curators seemed incapable of understanding metaphors or similes or the subtleties of human emotion. She had studied the Curators when they attempted some representation of feeling. They never endeavored to show anything other than the six universally recognized feelings of happiness, sadness, fear, disgust, surprise, and anger. And when they did, at no time did it seem genuine—like a smile that involved upturned corners of the mouth but not the eyes. Their mimicked facial expressions were an attempt to put the refugees at ease, not a reflection of limbic system activity in their brains. Constance wondered if they could feel at all. 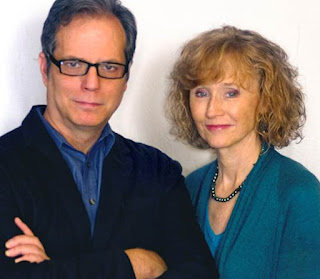 Paul Awad and Kathryn O'Sullivan are an award-winning husband and wife writing and filmmaking team. They have collaborated on feature and documentary films, screenplays, and a web series. WHEN EARTH SHALL BE NO MORE is their first book collaboration. Paul is a cinema professor and Kathryn is a theatre professor at Northern Virginia Community College. Kathryn is also the author of the Colleen McCabe mystery series.

Paul Awad and Kathryn O'Sullivan will be awarding a $50 Amazon or B/N GC to a randomly drawn winner via rafflecopter during the tour.

Email ThisBlogThis!Share to TwitterShare to FacebookShare to Pinterest
Labels: n

Good morning! Thanks for hosting us. It was fun writing this book together. We're excited about sharing it with everyone and look forward to reading the comments. Cheers, Paul and Kathryn

I'm happy to host! Good luck with your book.

Review of I Am One with the Universe 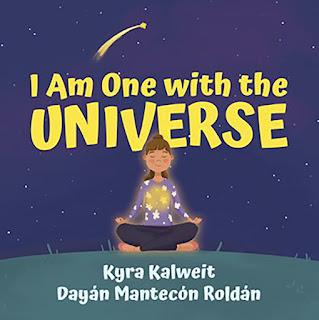